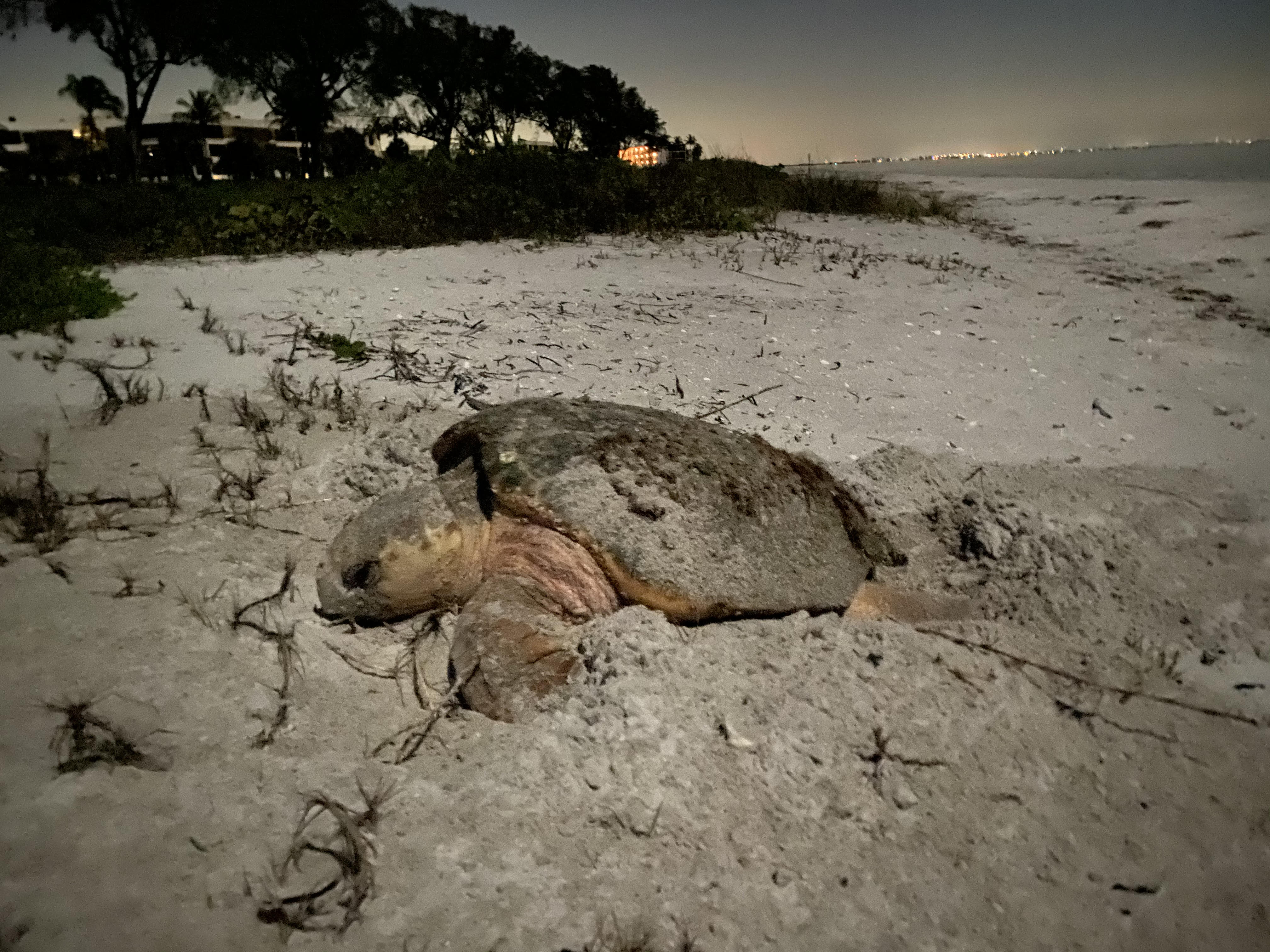 Sea turtle nesting season is off to a phenomenal start with 29 nests on Sanibel and 14 nests on Captiva. This photo of a nesting loggerhead (Caretta caretta) was taken by Coastal Wildlife Director Kelly Sloan last night without a flash; just a long exposure lit by the moon.

"It's hard to believe on this day last year we only had five nests on Sanibel and one nest on Captiva," said Sloan. "We can't say that it has to do with fewer people on the beach, but it's more likely due to the warmer water this season."

The phenomenal increase over last year includes two rare leatherback (Dermochelys coriacea) nests, which prompted a group from Florida Leatherbacks in Jupiter to travel over to try to get information on the nesting leatherback.

“We think it may have been the same leatherback that laid both nests, so they came over last weekend to see if she might nest again,” said Sloan. “They have been out on the beach at night with us for the last few nights and are going to try to encounter her one more time tonight.”

“Starting on May 1, our team surveys the beach from sunset to sunrise in search of nesting females. When a turtle is encountered, we measure the turtle and apply tags so we can identify that individual on future nesting events and learn about her behavior,” she said.

The photo here taken by a member of the Florida Leatherbacks team captures the nighttime project.

Information obtained at night gives our team incredible insight into metapopulation dynamics, temporal and spatial nesting patterns, habitat use, and much more. Managers use these data to identify emerging threats and develop informed conservation strategies.

“This year we’re also collecting blood from nesting females to determine the long-term effects of the 2018 red tide bloom on maternal health,” said Sloan. “Many of our loggerheads are on a two-year nesting cycle, which means a large percentage of the turtles we see on the beach this year were also here during the catastrophic red tide event.”

The team will be able to identify these turtles by their tags. The blood samples will allow them to learn more about how the red tide’s brevetoxin accumulation affects the health of the nesting females and if the toxins might be transferred to the hatchlings via the yolk sac.

Funding for the red tide research comes from the RESTORE Act. https://www.restorethegulf.gov/history/about-restore-act The RESTORE Act dedicates 80 percent of all administrative and civil penalties related to the Deepwater Horizon spill to a Gulf Coast Restoration Trust Fund and outlines a structure by which the funds can be utilized to restore and protect the natural resources, ecosystems, fisheries, marine and wildlife habitats, beaches, coastal wetlands, and economy of the Gulf Coast region.