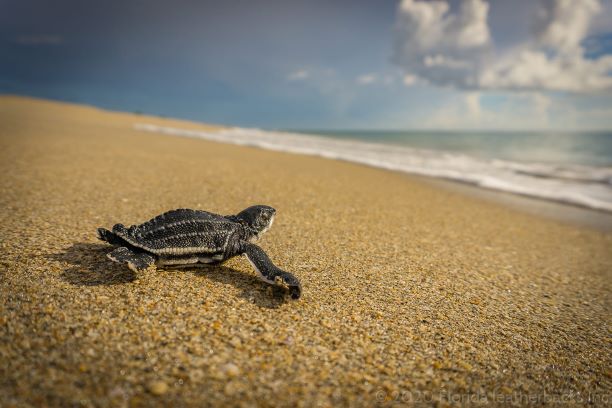 Editor’s note: We are pleased to announce this year's Evenings at the Homestead speaker series. Though we won't be able to see you in person, we're looking forward to meeting with you virtually. Stay tuned for more details and information regarding registration through Zoom.

Leatherback sea turtles are one of the rarest species of marine turtle on the planet, and their population in Florida remained somewhat of a mystery in this area until recently.

Two leatherback experts will kick off this year’s Evenings at the Homestead on Tuesday, Nov. 17.

By conducting nightly surveys to tag and identify each individual, biologists with Florida Leatherbacks Inc. have been able to define important population and biological parameters.

The rarest of the three species that regularly nest in Florida, more than 1,000 unique individual leatherbacks have been identified, important nesting parameters have been defined, and migratory patterns are better understood.

Kelly Martin has worked with sea turtles for nearly 20 years. She grew up in Michigan and obtained her Bachelor's degree in Zoology from Michigan State University. She began her career working with nesting leatherbacks, assisting in sea turtle rehabilitations, and conducting nesting surveys along the east coast of Florida.

From there she moved to Clearwater Marine Aquarium and ultimately Mote Marine Laboratory & Aquarium, where she worked in the aquarium, assisted in nesting research, and completed her master's degree in Marine Science at the University of South Florida -- studying the auditory abilities of loggerhead sea turtles.

She returned to the east coast of Florida as a biologist for Loggerhead Marinelife Center, where she helped manage nesting surveys on one of the densest nesting beaches in the world and managed a leatherback tagging and tracking project.

She currently works as the program coordinator for the Marine Environmental Education Center and serves as the president of Florida Leatherbacks Inc., a non-profit conducting leatherback tagging and tracking on the densest leatherback nesting beach in Florida.

Her passion lies with leatherbacks and she has seen just over 1,000 in her career but she is interested in all aspects of conservation of all seven species of sea turtle.

Chris Johnson is with the same group and will also be speaking.

He has been conducting marine turtle research since the early 1990s along Florida’s beaches.

Johnson has worked with the City of Boca Raton, Florida Atlantic University, Nova University and the Loggerhead Marinelife Center