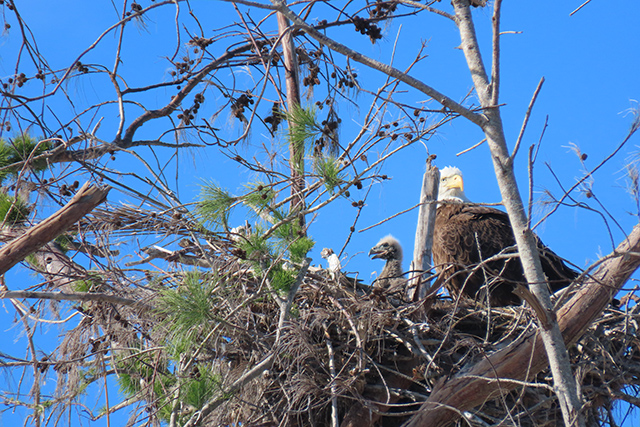 Seven of the 10 bald eagle pairs (Hailaeetus leucocephalus) that SCCF staff and volunteers monitor on Sanibel and Captiva have settled on nest locations for the 2022-23 breeding season, and four of these nests have hatched in recent weeks. The first chicks hatched on Jan. 3 and are expected to fledge by mid-March.

“In most cases, we rely on our knowledge of the approximate incubation time and the birds’ behavior to determine when a nest has hatched,” said SCCF Shorebird Biologist Audrey Albrecht. “Often, you can see adults feeding chicks long before you can actually see the chicks, especially when viewing from the ground.”

Thanks to the homeowner and our partners at Window to Wildlife, one of our Captiva nests can be viewed live 24/7.

“Much like the people of Sanibel and Captiva, our bald eagles are in varying stages of recovery. Some immediately started rebuilding after Hurricane Ian and laid eggs right away, while others are still selecting their nest sites or are just finishing reconstructing efforts,” Albrecht said, adding that some bald eagles may construct and maintain multiple nest structures, but they only lay eggs in one each year.

One bald eagle who hangs out around Dairy Queen on Periwinkle Way has selected a new female mate, a promising sign after his previous mate was believed to be missing before Hurricane Ian. The new mate is younger than his prior one and still not bearing full adult plumage, though subadult bald eagles can be capable of breeding in their fourth year, according to the Florida Fish and Wildlife Conservation Commission. 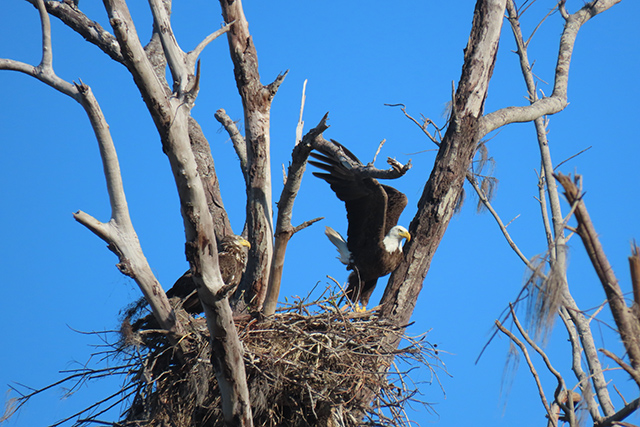 In Florida, the bald eagle nesting season runs from Oct. 15 through May 15.