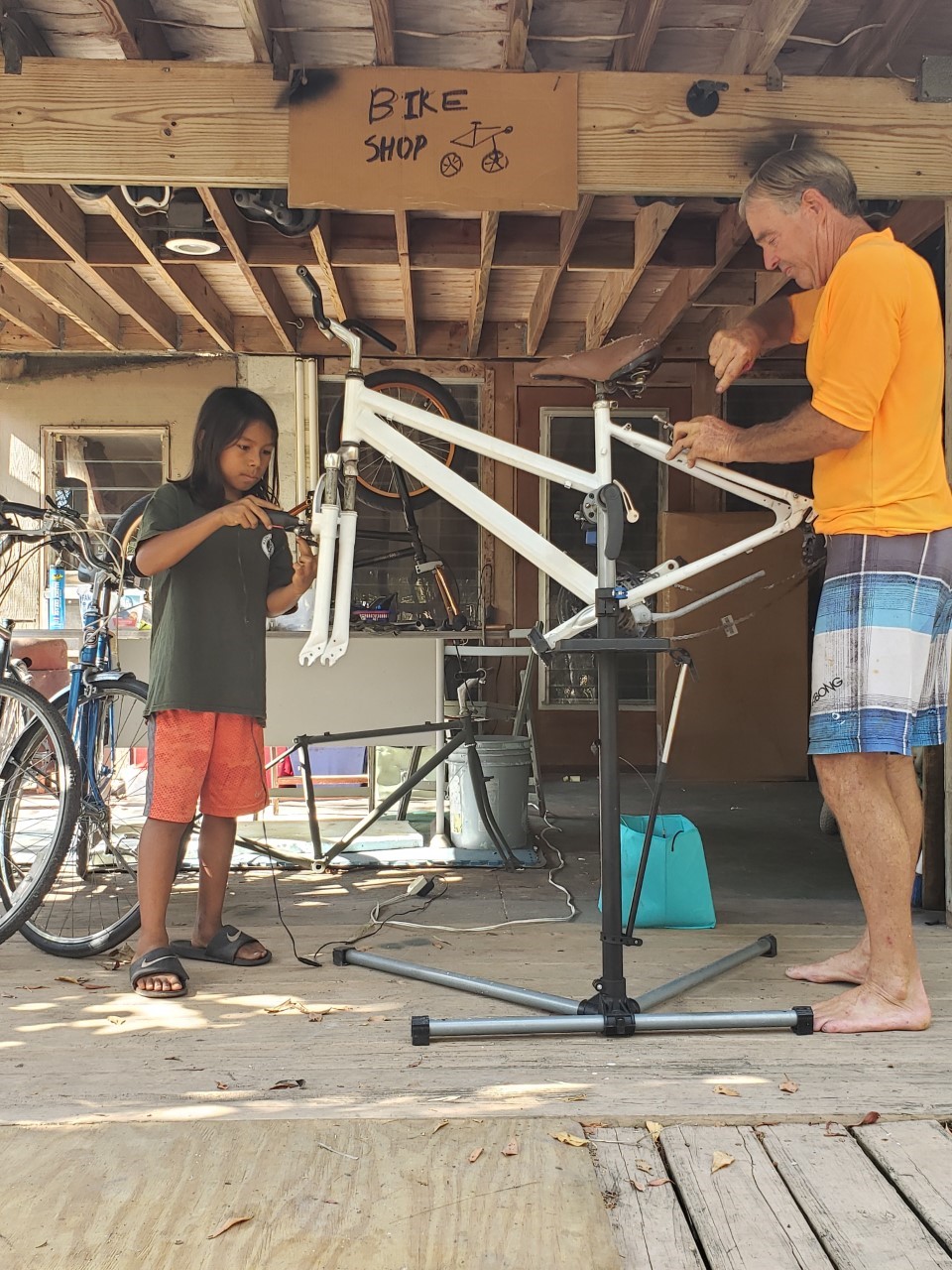 Thanks to recent donations that have provided SCCF interns and staff with a new fleet of bikes, SCCF is refurbishing its old bikes and donating them to those in need.

The community goodwill effort was made possible by a recent donation of 10 bikes from Billy’s Bike Shop and a monetary donation from Deborah La Gorce through the SCCF gift catalog that allowed the purchase of six additional bikes for use by SCCF interns and staff.

Bikes support sustainability and provide an environmentally-friendlier mode of transportation, while reducing dependence on motor vehicles and fossil fuels.

The new fleet of bikes displaced the old hodgepodge fleet of about 15 bikes which were held together by cable ties, duct tape and rust. That’s what motivated SCCF Marine Lab Research Associate Mark Thompson to take it upon himself to give the old bikes new homes.

“I have always had a love for bikes and it hurts me to see any potentially useful bikes go to waste,” he said. “So, I asked Facilities Manager Jeff Siwicke if I could try and repair the old bikes and find homes for them where they would be appreciated.”

Siwicke immediately accepted the deal. So, Thompson and his 10-year-old son, Yuan, started working in mid-2019 to convert these near-dead bikes into useful units.

“At one time, our home looked like a bicycle battlefield, but we got organized and set up our own outdoor bike shop and slowly began producing some of the nicest rides this side of Tesla,” Thompson said.

About half the bikes were so derelict that the parts were stripped off them to build up a parts department for the bike shop they set up. Soon, they had parts and frames and started picking up additional units alongside the road on Sanibel trash day.

“It is truly amazing and sad the bikes which get thrown out. Sometimes they just have a flat and are thrown out,” said Thompson. “Sometimes it’s just a bad seat or broken cable. If a bike has a both a flat and a cracked seat – it is doomed to the Sanibel trash truck.”

In late 2019, Thompson and his son talked to Miriam Ortiz, founder of the Gladiolus Food Pantry, which is housed in the green building located on Gladiolus Drive in Harlem Heights.  In 2019, 8,626 families visited the pantry which translates into 27,959 individuals (8,686 children, 15,141 adults, and 4,132 seniors).

Ortiz offered what they were looking for -- a place that could find homes for the refurbished bikes and a way to reduce the bike overpopulation problem at their house.

“Miriam likes to get a few bikes a month and matches the bike with people who need transportation, or kids who have never had a bike,” he added.

At one time, Ortiz accepted bikes from the sheriff’s office but they would regularly drop off 50-100 bikes at a time. This would overwhelm the pantry and cause storage problems. 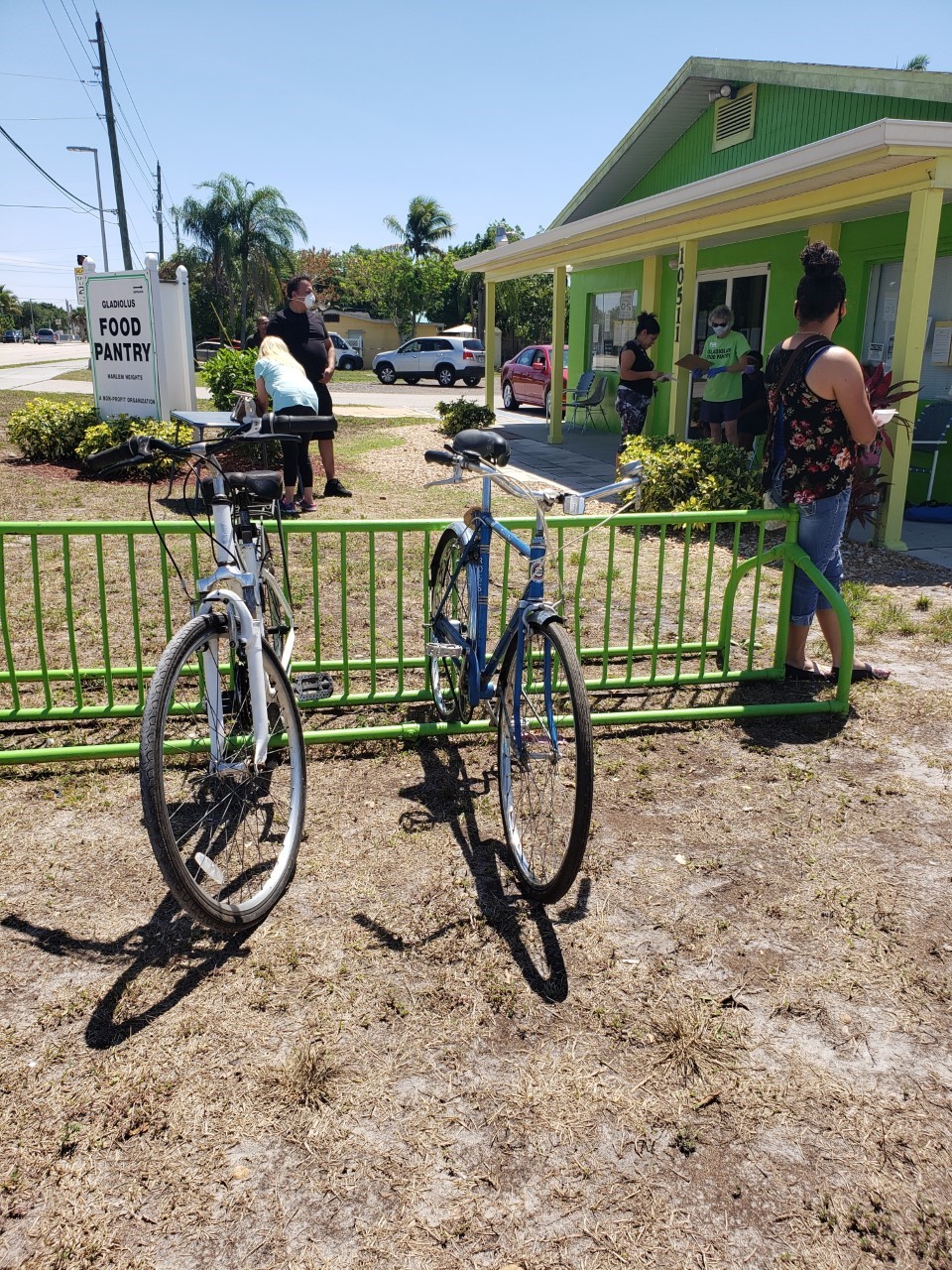 “Our rate of refurbishing bikes at a more snail-like pace works out well for the folks at the pantry. Bikes are placed in homes at the rate they are brought in,” he said. “Since mid-2019 we have dropped off about 20 refurbished bikes.”

To refurbish a bike, they replace any parts that are not usable, replace bearings, grind all the rust off of bolts and metal parts, paint if needed and make sure bikes are completely rideable and safe to operate.

“We are now down to our last 1-2 bikes at our home shop and will be on the lookout for more discards,” said Thompson. “We cannot cruise all of Sanibel’s streets on trash day so we know many bikes are doomed for disposal before we can rescue them.”

Thompson and his son would like to put out a Save-the-Bikes plea for any SCCF members or island residents who are contemplating throwing out their old bikes or have old parts lying around.