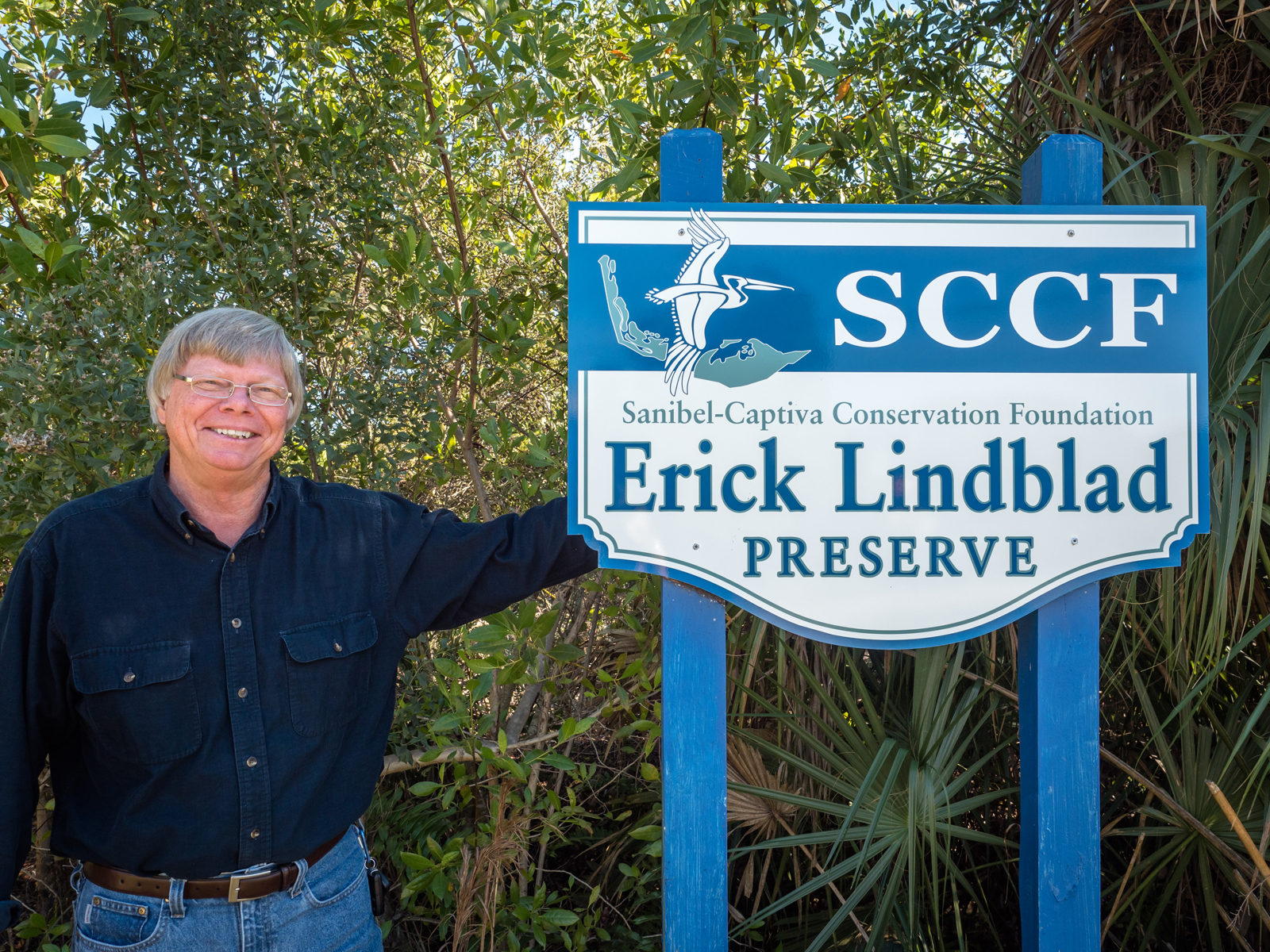 After its founding in 1967, SCCF began by focusing on education, research, the outright purchase of land with emphasis on Sanibel’s unique freshwater wetlands, and advocating for land preservation on adjacent islands via the State of Florida.  SCCF’s first land purchase, in February 1969, was one of the parcels that now comprise the Erick Lindblad Preserve; like other early SCCF land acquisitions, the purchase was facilitated by The Nature Conservancy.  The final parcel in what was the Center Tract Preserve was purchased in 1997.  The Preserve covers 258 acres.

Since Erick Lindblad joined SCCF in 1986, he has been instrumental in the acquisition of 1,190 acres, about two-thirds of the 1,800 acres of Wildlife Preserve owned by SCCF on and around Sanibel and Captiva.  Lindblad brought on staff to restore the purchased land and create habitat for native wildlife; acquired land was often overrun with invasive non-native plants.  He worked in partnership with the City of Sanibel and the J.N. “Ding” Darling National Wildlife Refuge on a major project to restore the Sanibel Gardens Preserve, and the partners continue to work together.  In 2002, he oversaw the establishment of SCCF’s Marine Laboratory and, more recently, construction of a new Marine Lab facility at Tarpon Bay under the auspices of “Ding” Darling NWR and the U.S. Fish and Wildlife Service, which will be dedicated in January.

As part of his commitment to the sustainable development of Southwest Florida, Erick served on Conservation 20/20, Lee County’s Conservation Land Acquisition and Stewardship Advisory Council and the Land Management Subcommittee. He also was appointed by the Lee County Board of County Commissioners to serve as the county’s representative on the first Babcock Ranch Inc. Board, which worked to develop the initial management plan for the state’s 71,000-acre Babcock Ranch Preserve in Lee and Charlotte Counties.

He served on the Board of the International Osprey Foundation, the Caloosahatchee River Citizens Association and the Babcock Preservation Partnership, and also served on the Technical Advisory Committee of the Charlotte Harbor National Estuary Program.

Erick has served on various City of Sanibel committees over the years including the Budget Review Committee, Wildlife Committee, Interior Wetlands Study Committee, and the Algae Task force. He was awarded the Walter Klie Lifetime Achievement Award from the Sanibel-Captiva Islands Chamber of Commerce.

Prior to his tenure at the Conservation Foundation, he served as Director of Newfound Harbor Marine Institute at Seacamp on Big Pine Key, FL from 1979 to 1986. He graduated in 1974 from Millikin University in Illinois with a B.A. in Biology.  He and his wife Ellen have two children and five grandsons.